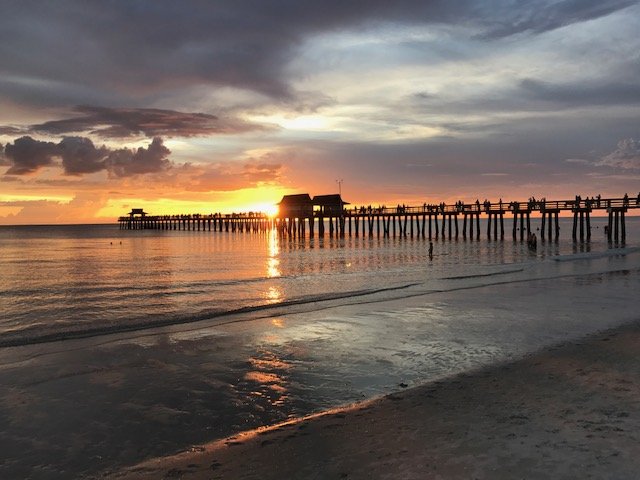 The historic Naples Pier is located on the Gulf of Mexico at the West end of 12th Avenue South. It is a favorite location for sightseers and fishermen with plenty of space to cast a line. The Pier features restrooms, showers, a concession stand with covered eating area, and beach supplies.  It is one of the most photographed piers in the United States. Sunset pictures of the pier are especially nice!

Table of Contents hide
A Historic Landmark
Parking at the Pier
Features of the Pier
Related posts:

The Naples Pier was originally built in 1888 as a freight and passenger dock. It was first constructed by newspaper man Walter N. Halderman, founder of Naples.  The pier was initially to act as a location for loading and unloading goods and baggage to help local commerce. It also served a hotel located across from it at the time. After its construction, the Naples Pier became a popular location for social gatherings like parties and dances.

In 1922 most of the Naples Pier was destroyed by a fire from a discarded cigarette.  Rebuilt in 1924 it’s length is now 1,000 feet.  The pier has also undergone several renovations due to hurricane damage, the latest of those in 1960 and 2015.

Completed, the newly renovated Naples Pier remains a monument to the local lifestyle and culture.  It is also a major attraction for both locals and tourists alike to visit while in Naples.

Parking at the Pier

Parking for beach access in the City of Naples requires the resident or visitor to have a beach parking permit, feed the parking meters, or pay-by-space. Enforcement is year round.  Parking in this area can be difficult to find, so get there early, especially if you are going for sunset!

Features of the Pier

Fishing from the pier does not require a fishing license. The City of Naples has purchased a bulk fishing license for the Pier. The beach here also features volleyball nets and is one of the best places to catch a spectacular Naples sunset.

A Day Trip to Naples from Marco Island

A Day Trip to Naples Zoo