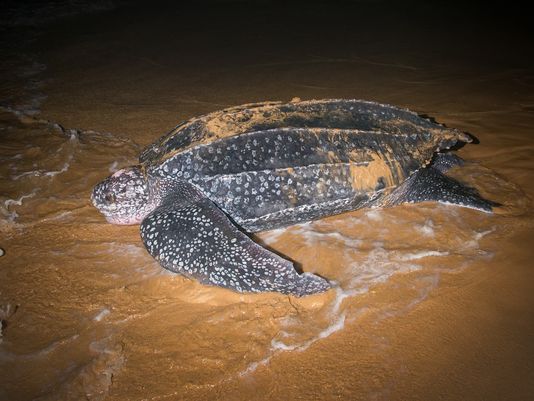 Sea turtles on Marco Island are one of the island’s greatest assets! Did you know that on average there are 80 Loggerhead Sea Turtle (Caretta caretta) nests per year on the 4 miles of Marco Island’s beach?  Whether you live here or are just visiting, you can easily participate in protecting these threatened creatures and their important nesting environment.

Each May and continuing through early August, female loggerhead sea turtles crawl out of the Gulf of Mexico and nest on Marco Island’s beach. The baby turtles, or hatchlings, will emerge 60 days after the nests are laid. Hatchlings generally are emerging from early July through the end of October each year.  During this time, Marco Island has regulations regarding outside lighting at night along and on the beach.  Each turtle nest is recorded and monitored during the nesting season.

It takes a female turtle 1 to 3 hours to lay an average of 100 eggs in the sand.

*A female turtle can nest several times per season (up to 7), but may only nest every 2-3 years.
*The female turtle uses her rear flippers to dig the nest cavity before depositing her eggs.
*Male turtles spend their life in the open ocean never crawling up on the beach.
*The temperature of the sand determines the sex of the hatchlings.
*It is estimated that only 1 in 1000 sea turtle hatchlings will survive to reproductive maturity.
*Sea turtles cannot retract their heads into their shells.
*A group of sea turtles is called a flotilla.

How Long Do Sea Turtles Live?
No one knows for sure. According the US Fish and Wildlife Service, scientists are uncertain how long they live because there is no known way to determine their age.

Sea turtles spend almost their entire lives in the sea. They are excellent swimmers, gliding gracefully through the water with flipper-like forelimbs and a streamlined shell. The Sea turtles frequently come to the surface to breathe when active, but can remain underwater for several hours when resting. They are always on the move and travel hundreds of miles across ocean waters.

The six sea turtle species in the United States are; Loggerhead, Green turtle, Leatherback turtle, Hawksbill turtle, and the Olive Ridley sea turtle. Marco Island’s most common variety of sea turtle is the loggerhead, which averages 200 to 250 pounds. Larger leatherbacks and green turtles nest here in smaller numbers.  Most of Marco Island’s sea turtle nests are usually on Sand Dollar, near Tiger Tail Beach. The remainder are located on the main beach and Hideaway Beach. Marco Island beach is vital to the sea turtle’s continued survival in Southwest Florida.

Among the largest of living reptiles, sea turtles have scales and a bony shell, are cold-blooded, breathe air, and lay their eggs on land. It is illegal to hunt sea turtles in most countries; however they continue to be harvested for food and are considered a delicacy in many parts of the world. Sea turtles play a key role in the Gulf Coast’s fragile ecosystem. Manatee and sea turtles are the only creatures in the world to eat the sea grass which grows on the ocean floor. Sea turtles are vulnerable to oil pollution because of their tendency to float upon the ocean surface.

What can you do to protect the sea turtles on Marco Island?

*Make sure you leave the beach clear of all beach toys, fishing line, plastic bottles or any other item that would be an obstacle for turtles either leaving the water or returning to the water.  The adult turtles often become entangled in fishing line and the baby turtles can become disoriented when objects are in their path to the water.

*Turn off lights after 9 pm in condos and hotel rooms along the beach in turtle season.  Avoid flash lights on the beach during turtle nesting season.

*Fill all holes along the beach that turtles could become trapped in or that could cause a female to return to the ocean instead of laying eggs.

*Comply with posted signs that are on nesting sites asking that you stay back from the nests.

*If you are lucky enough to see a nest hatching, please follow all instructions from the volunteers that are monitoring the nesting process.

Visit our website at https://seamarcondo.com to see our rates and availability. Our website also provides more information on Sea Mar Condo and Marco Island.
Let us help you make the most of your Marco Island vacation!

What You Need To Know About Turtle Season on Marco Island

Looking for Manatee on Marco Island