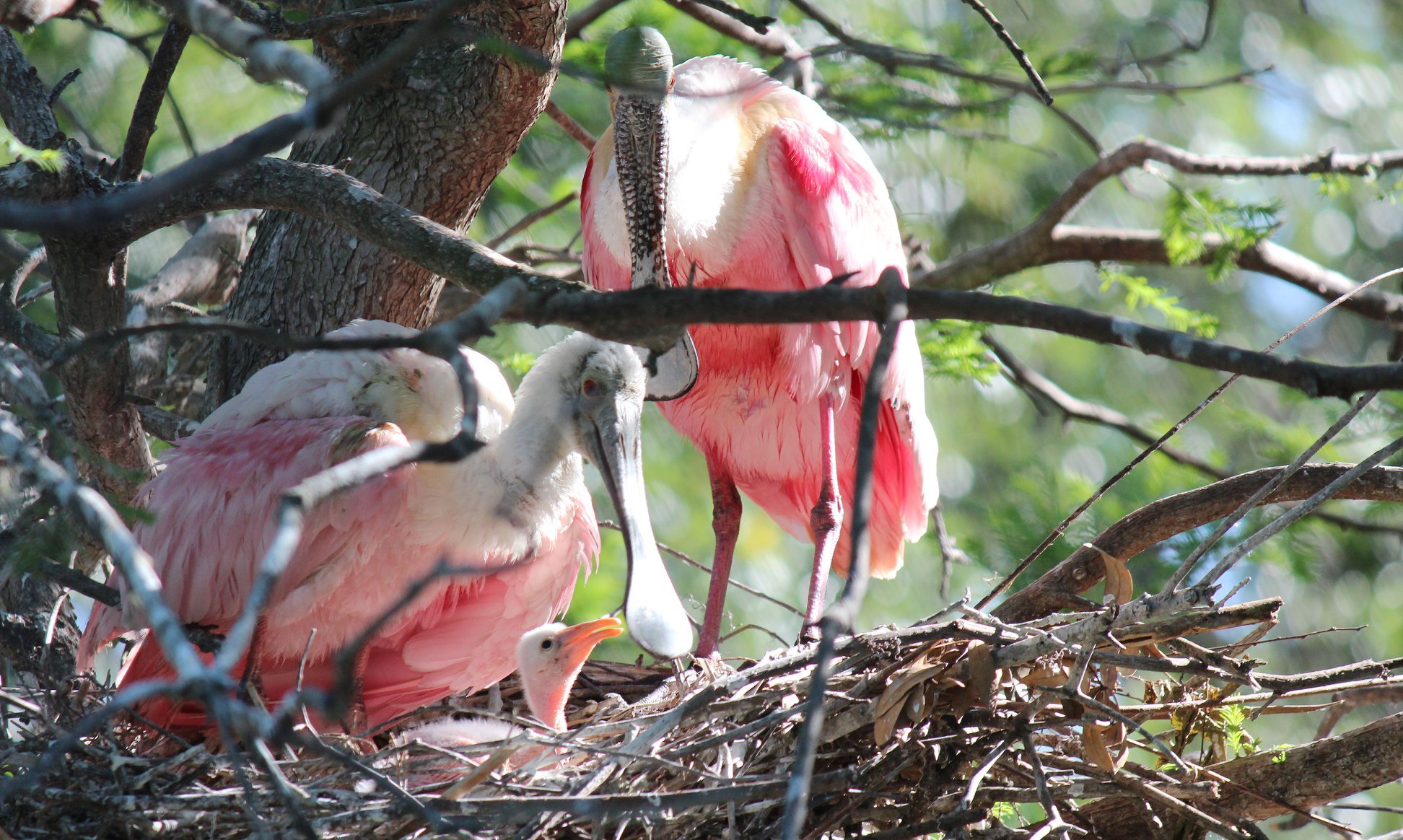 When I am in the Marco Island, 10,000 Islands/Everglades area, I am always on the lookout for the roseate spoonbill. It is such an intriguing, beautiful bird.  It is definite among my favorite as is the pelican and the eagle.  Seeing the beautiful birds around Marco Island is just a bonus to my beach trip!

Roseate spoonbills nest in mixed colonies in mangroves or trees on the coast. The female builds the nest while the male retrieves the nesting materials. The female lays up to three whitish-colored eggs. Both adults incubate the eggs for up to 24 days. The young remain in the nest for approximately 35-42 days. They are fed by both adults. Critical Wildlife Areas protect some of Florida’s most vulnerable wildlife, including the state-threatened roseate spoonbill, from human disturbance during important life stages such as breeding and nesting.

Gorgeous at a distance and bizarre up close is the Roseate Spoonbill. Locally common in coastal Florida, Texas, and southwest Louisiana, they are usually in small flocks, often associating with other waders. Spoonbills feed in shallow waters, walking forward slowly while they swing their heads from side to side, sifting the muck with their wide flat bills.

The roseate spoonbill is a large wading bird known for its pink plumage and distinctive spoon-shaped bill. Its upper neck and back are colored white, while the wings and feathers underneath display the more recognizable light shade of pink. The wings and tail coverts are deep red, along with the legs and the iris of the eyes. Part of the spoonbill’s head is a distinct yellow-green. When they are young, the birds are duller in appearance, brightening as they mature.

Reaching a height of up to 2.5 feet, the roseate spoonbill’s wingspan can stretch 1.5 times as wide, reaching up to 4 feet.

Yes, Spoonbills are on Marco Island

In the United States, the roseate spoonbill can be found in southern Florida (yes, in Marco Island), coastal Texas and southwestern Louisiana. Their breeding range extends south from Florida through the Greater Antilles to Argentina, Chile and Uruguay. Roseate spoonbills usually live in marsh-like areas and mangroves.

While feeding, spoonbills utter a low, guttural sound. They are also known to call during breeding displays and when flying.

Using its spoon-like bill to scoop prey up from shallow water, the roseate spoonbill’s diet typically includes minnows, small crustaceans, insects and bits of plants. They feed in the early morning and evening hours in both fresh and saltwater wetlands. It is believed the roseate spoonbill receives its bright coloring from the pigments of the crustaceans that it eats.

A social bird, the roseate spoonbill often feeds, roosts and flies in formation with its species. They nest singly or in pairs, usually in trees over water and sometimes on small islands.

Typically roseate spoonbills do not breed until their third year. To attract one another, courtship displays include ritualized exchanges of nest material, dancing and clapping. Female spoonbills create deep, well-constructed nests out of sticks using materials brought to them by males. The Florida population usually nests in red and black mangroves sometimes with wood storks, while the Texas and Louisiana populations often nest on the ground in offshore island mixed colonies with gulls, terns and herons.

A female lays a clutch of one to five eggs. Both parents share incubation duties, which last about 22 to 24 days. A newly hatched chick has mostly pink skin with a sparse covering of white down. The parents feed the chick by dribbling regurgitated material into the baby’s upturned bill. After one month, the chick will begin to exercise by clambering through the branches or foliage surrounding the nest, and by six weeks, it will have developed wing feathers large enough for flight.

The roseate spoonbill sleeps standing, usually on one leg, with its head tucked beneath its back and shoulder feathers.

They can live up to 15 years in human care and an estimated 10 years in the wild.

Visit our website https://seamarcondo.com for more information on Sea Mar Condo, Marco Island, FL. We want to make your vacation on Marco Island a trip of a lifetime!