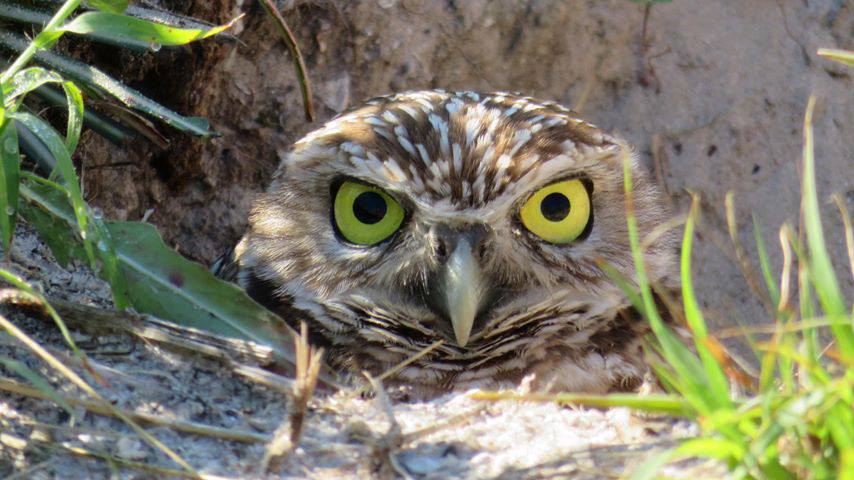 Marco Island is known for its beautiful beaches. However, one thing that makes the island really special is its wildlife.  One little creature is especially cute if you get the chance to spot it. The burrowing owls on Marco Island can normally be spotted on the corner of Bald Eagle and Elkcam Street – south side.

As the island grows (more houses being built) the burrowing owls are becoming harder to see. They are protected when the owls are actively nesting.  When the babies have left and the adults stop using the nest, it is then possible to build on a lot. The Burrowing Owl Society provides starter packs for home owners who want to encourage owls to nest on their property.  The number of vacant lots on the island is diminishing fast. (The Marco Review)

Owls are unmistakable birds, and that goes double for a long-legged owl that hunts on the ground during the day. Burrowing Owls are small, sandy colored owls with bright-yellow eyes. They live underground in burrows they’ve dug themselves or taken over from a ground squirrel, or tortoise. The owls live in grasslands, deserts, and other open habitats. They hunt mainly insects and rodents. Their numbers have declined sharply with human alteration of their habitat and the decline of ground squirrels. 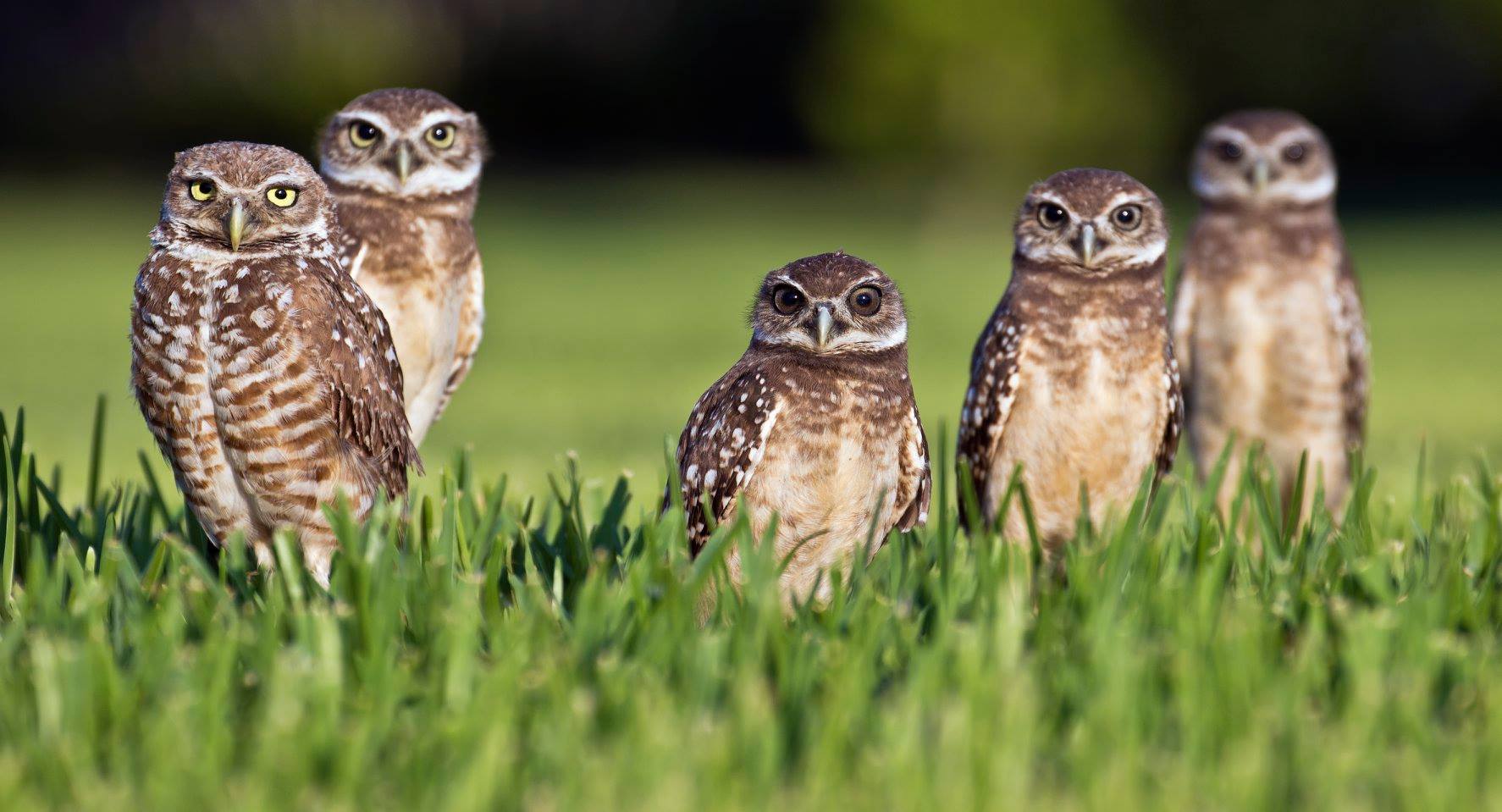 Unlike most owls in which the female is larger than the male, the sexes of the Burrowing Owl are the same size.

In the absence of suitable homes created by ground squirrels or other burrowing animals, Burrowing Owls have been known to nest in piles of PVC pipe unintentionally provided by humans. Conservationists make use of the owls’ adaptability by supplying artificial burrows made of buckets, pipes, tubing, and other human-made materials.

Burrowing Owls have a higher tolerance for carbon dioxide than other birds.  They spend long periods underground, where the gas can accumulate to higher levels than found above ground.

Before laying eggs, Burrowing Owls carpet the entrances to their homes with animal dung, which attracts dung beetles and other insects that the owls then catch and eat. They may also collect bottle caps, metal foil, cigarette butts, paper scraps, and other bits of trash at the entrance, This can signify that the burrow is occupied.

The nest burrow can be several yards long and is usually less than 3 feet deep.  Size depends on the mammal that originally excavated it. Burrows tend to make numerous twists and turns, with a mound of dirt at the entrance and an opening at least 4–6 inches wide. The owls often line their burrow with livestock manure, sometimes with feathers, grass, or other materials. When owls dig their own burrows, the process may take several days.  It takes them less time to prepare the burrow for nesting when they use an existing burrow.

Lifestyle of a Burrowing Owl 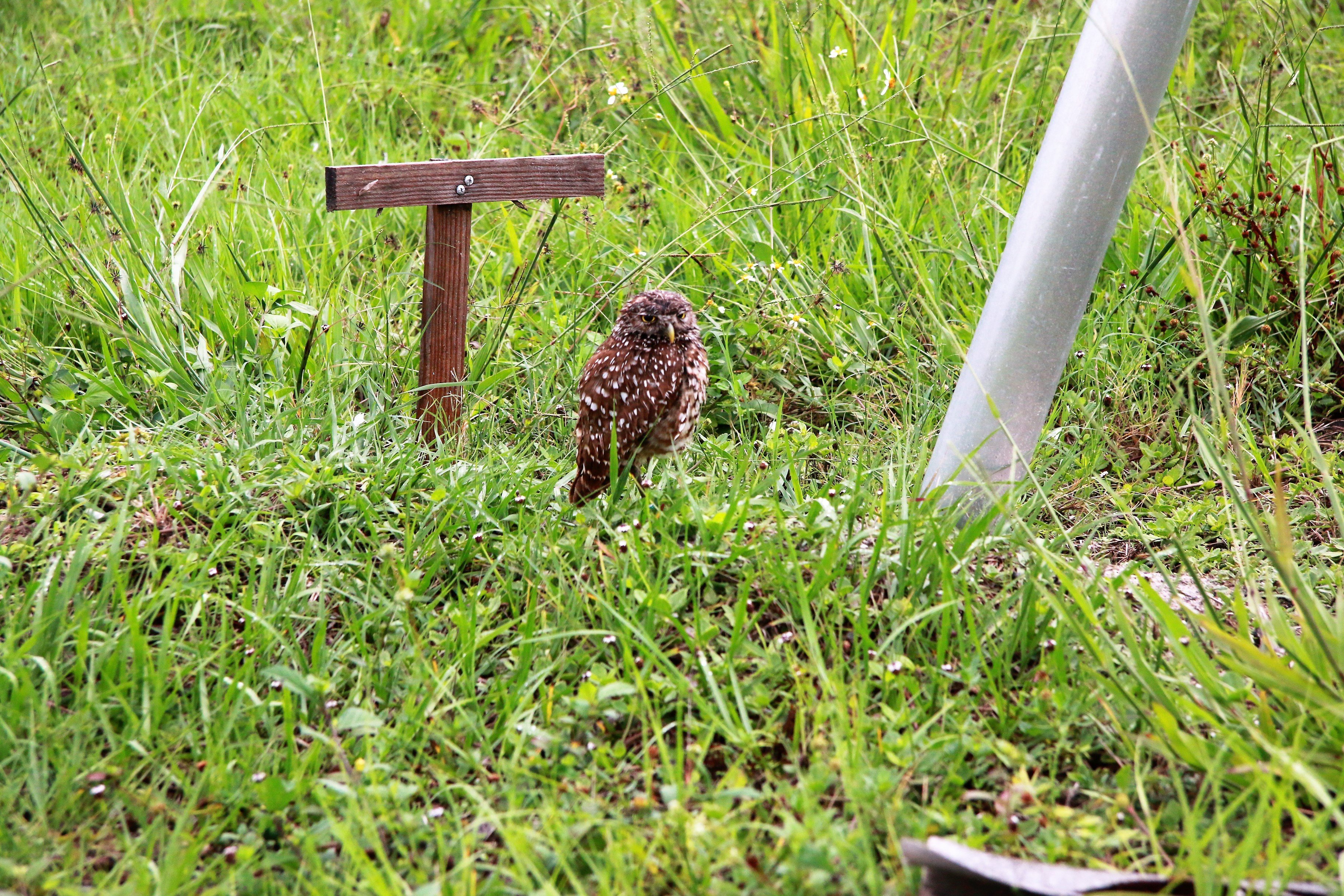 Burrowing Owls hunt at all hours of the day and night. Usually staying close to the ground, they fly, hover, walk, or run, seizing prey in their talons. Between forays for food, they sleep on dirt mounds at their burrow entrances or on depressions in the ground. Disturbed owls bob jerkily up and down, as do hunting owls pinpointing prey. They are mostly monogamous and breed close together in loose colonies. Females stay in or near the nest burrow until chicks fledge.  Males tend to stand guard at a nearby burrow or perch. Males defend their territories against other males by vocalizing, displaying in a weaving crouch with feathers fluffed, or chasing and attacking with outstretched talons. Courting adults—mainly males—display by circling overhead or flying dozens of feet into the air, hovering for a few seconds and then rapidly descending. Pairs vocalize, rub bills, and preen, the male calling and presenting food to the female. Young owls play-hunt by jumping on each other, on prey brought by their parents, and on dung around the burrow.
Credit: The Cornell Lab of Omithology – All About Birds

Visit our website https://www.seamarcondo.com for more information on Sea Mar Condo, Marco Island, FL. We want to make your vacation on Marco Island a trip of a lifetime!